skip to main | skip to sidebar

This is bittersweet for me to say, but this is farewell. My support for Governor Palin and what she stands for is as fervent as ever, but I've decided to focus my blogging on less satirical stuff, and focus more on the 2010 elections, conservatism, and Governor Palin (but in a less satirical, goofy way). I've really enjoyed doing this blog, and I greatly appreciate all of you for reading and commenting. Thank you so much!


On to November! Let's take back the House and the Senate, and later the Presidency!

From my laptop to yours, God bless!
Posted by Whitney Pitcher at 12:39 PM 15 comments:

The Roar of the Mama Grizzlies!

Well, my friends,it's been a while. Madame has been fishing, and I'm not allowed on the boat. I have as much of an aversion to fish guts as Angria Mitchell. However, we did decide to spice things up with a new endorsement last night: another mama grizzly from Tennessee! We even included a JPEG. How do ya'll like that?

However, the real fun came in a youtube link that we got to post. Yes, we've posted these before on occasion, but not like this! A flash forward to 2012!? I certainly hope so! Mama grizzlies roar!

Posted by Whitney Pitcher at 7:26 AM 5 comments:

Wow! The LSM, as usual, was causing trouble at one of Madame's speeches, so she thought she'd be straight with them. Especially after she was accused of kicking them out. What? Willow was with her! She could, but wouldn't have done anything to the "media". Madame decided to share part of her speech with them. I have no idea how she fit this all on her palm, but oh well. This post is full of nightsticks! Categorized nightsticks! I loved it because I got to put some headings in bold and use cap locks! Awesome. I think this may have been a dileniation of the Palin Doctrine. Look at all the individual nightsticks: defense spending, the US Navy, Obama's Foreign Policy Inheritance, the War on Terror, Afghanistan, Alienating Our Allies, Coddling Adversaries, An "Enemy Centric" Foreign Policy (ouch!), and A Different View of America. Yikes! She smack the Great Opologizer hard with multiple types of night sticks. For reminiscence's sake, let's take a look at the night stick:

55% of the SCOTUS understands the 2nd Amendment!

Sorry, I'm a bit behind. It's Bush's fault, just like the oil spill. Anyways, yesterday the Supreme Court handed down a ruling that said the Constitution was right on guns! The decision was 5-4, which means that only 55% of the SCOTUS understands the Constitution on this issue. Sigh. Madame was a bit more positive when she posted her thoughts on this decision on Facebook calling it a victory for the second amendment.

I called into my friend, TOTUS, to get the reaction of the White House. He said that the Great Opologizer was bummed, but FLOTUS was excited, as the ruling overturns the gun ban in Chicago. It's summer; FLOTUS wants the right to bare arms when she goes back home to Chicago: 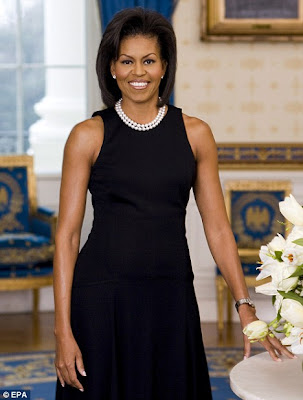 Some Good Friends Stop for a Visit!

Lots of stuff going on right now and a few visitors! Thomas van Fine ;) and Meg "the Enforcer" Stapleton stopped by to call out the ankle biters! Madame's still undefeated; she settled one of the pieces of silliness thrown at her.

We also highlighted a few stops that we'll be making in the coming days! Woohoo! We made another endorsement too for Kansas Senator. There's no place like home!
Posted by Whitney Pitcher at 12:38 AM 1 comment:

I had the privilege of helping Madame endorse another candidate in South Carolina yesterday. However, I must say that BOTUS has been the one who has been busy today! First, there was a message regarding the Day of Prayer for the Gulf spill. Then, there was a nice, sweet Father's Day message. But the real kicker is the nightstick of a tweet Madame dealt to Chief of Staff Dead Fish. Yikes! Also, as you can see, if you hop on over to the Twitter page, we've spruced it up a bit by removing the book tour stuff. We'll see what pretty new background we get in the future. Who knows? But I hope one day that the number 2012 will be involved.
Posted by Whitney Pitcher at 6:31 PM 1 comment:

We endorsed three mama grizzlies today! The Softy Southpaws probably thinks that Madame is a sexist species-ist. She likes mama grizzlies, but she hates polar bears. Madame wants to turn Congress and the state houses into zoos full of grizzlies! She endorsed Congressional candidates in the Land of Fruits and Nuts and yet another in apple country, plus a gubernatorial candidate in Oklahoma.
Posted by Whitney Pitcher at 11:18 PM No comments:

Whitney Pitcher
What's the difference between a farmer's daughter and a pit bull? Mascara.